This information below was provided by Independent National Electoral Commission (INEC), and is subject to updates when necessary.

Remember to turn up early enough to cast your votes and ensure your ballot is cast carefully to prevent it being voided. 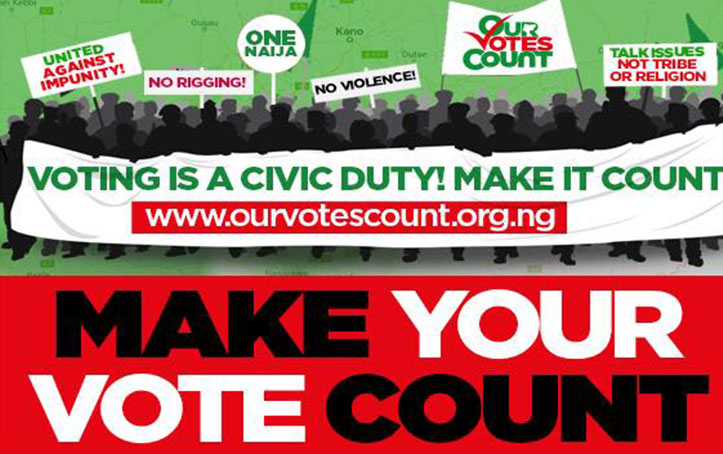 Who is a Voter?

A voter is a person who has a right to participate in an election by an elector. In Nigeria, a voter is a citizen who is 18 years old and above and is duly registered whose names and details are in the register of voter. In effect, anyone who can exercise the right to vote is a voter. However, not all voters can be voted for. Anyone who contests in an election and votes is not only a voter for the purpose of that election, but also a candidate. He therefore plays a dual role at the time he is standing for an election. In the Nigerian context, such a person can only contest as a candidate on the platform or sponsorship of a political party.

To be registered as a voter, an individual must be:

Rights of the Voter

The rights of every Nigerian citizen are entrenched in chapter four of the 1999 Constitution of the Federal Republic of Nigeria.

A right is a moral or legal claim to have or get something or to behave in a particular way. It refers to the things or activities to which a Nigerian citizen is lawfully entitled, without fear of prosecution, discrimination or any form of hindrance. Within the electoral process, these rights include the following: –

It is the right of every qualified citizen to register to vote during the 2019 general elections. This right is guaranteed by the constitution and cannot be denied any potential qualified citizen. However, the Commission has suspended the registration exercise in order to get the voters’ register ready for the 2019 elections. The register has to be certified, published and made available to the Political Parties at least 30 days to the elections. The Continuous Voter Registration exercise will resume after the 2019 general elections for eligible individuals to register.

Right to vote and be voted for when registered:

Every person who has satisfied the requirements laid down by the law is eligible to vote and be voted for. However, a voter will only be able to exercise that right if he/she is in possession of a valid voter’s card, his/her name is on the Register of Voters and he/she turns up at the polling unit between 8:00am to 2:00pm on Election Day. To be a candidate, one must fulfill the legal requirements which vary depending on the type of elective office involved.

To be voted for, a person has to put himself forward as a candidate for an elective office. This can only be done through the sponsorship of a political party.

Right to recall an elected representative:

A voter has a right to participate in the process of recall of an elected legislator. To recall means to summon back and withdraw the mandate given to an elected legislator through an election. A candidate once elected to the Senate, House of Representatives or House of Assembly can be recalled by the registered voters of the affected constituency.

Voters have the right to mark their ballot papers (make their choices) in secret. The voting exercise in an election situation in most developing countries especially in Africa, South of the Sahara, is sometimes fraught with dangers and bitter conflicts. In order to avert assault and open attacks, polling booths often provide privacy and security for voters.

Right to attend Rallies and Campaigns of political Parties and Candidates:

A voter has the right to attend the campaigns of Political Parties and Campaigns during the build-up to the 2019 general elections in order to receive information about the programmes they intend to implement if voted into office. This will enable the voter decide on which candidate to vote for.

Right to Information About Election:

A voter has a right to be informed about the details of the elections such as the time, date, procedure, etc.

It is the duty of every eligible citizen to register and ensure that his or her name is correctly listed on the register of voters in the area where he or she intends to cast his/her vote.

This can be achieved by cross checking the Preliminary Register of Voters during display for claims and objections for any irregularity on the registrant’s details and acting accordingly.

This is perhaps a voter’s most important responsibility. On Election Day, each voter is expected to take his/her permanent voter’s card and proceed to the polling unit in his/her neighborhood where his/her name is listed on the voter’s register.

Responsibility to conduct oneself in an orderly manner:

For a free and fair election to take place, it is important that voters comply with all laws and regulations governing the electoral process so as to ensure peace and orderliness. Hence, it is the responsibility of the voter to conduct him/herself in an orderly manner before, during and after election and encourage others to act in similar fashion.

Towards this end, the voter is supposed to wait for his turn on the queue, obey the directives of electoral officials, cast his/her vote peacefully. After casting the vote, the voter should leave the polling zone to avoid unnecessary clustering which may result in conflict. Grievances, if any, should be channeled through the appropriate quarters, using the legal machinery put in place, rather than resorting to illegal actions.

The Permanent Voter’s Card which is issued to every voter qualifies him/her to vote in an election. This card must be kept safe. It is not transferable. It must not be sold, given to another person or damaged.

To prevent the PVC from damage or loss, the voter must:

Responsibility to enlighten others about the benefits of participation:

Voters should encourage others about the benefits of registering and voting during elections. This will help reduce apathy and ensure that a good number of voters participate in electing candidates into various elective positions.